These bottles have been lurking, and it’s proper to assess them before they are entirely empty – in itself a recommendation. It’s entirely possible to accompany this rich wine style with foods – hard cheeses suffice – but in cool months an open fire, witty company and a sparkling comedy or “film noir” would be my preference.

These wines are made from Muscat a petit grains Rouge grapes (aka Brown Muscat) picked when ripe, fermented, fortified with neutral spirit and matured in large oak. With time, the wine becomes more concentrated, and complex. The art is again in blending judicious quantities of younger material to keep the wines fresh. Companies can make several different muscats (Morris releases 4 or 5) and the oldest can command prices of over $1000 per bottle. Considering the average age and holding time, this kind of price is not farfetched, but substantial pleasure can still be derived from more basic offerings.

Within Australia, northeast Victoria – particularly around Rutherglen –  is the epicentre of this style, with Glenrowan a significant outlier. This style of Muscat is also made in other areas such as the Barossa Valley, and Swan Valley but I am much less familiar with their wines.

Once opened, the bottles can be kept for several weeks, but its uncommon for open bottles to survive long at my home, unless placed in a cupboard and temporarily forgotten. 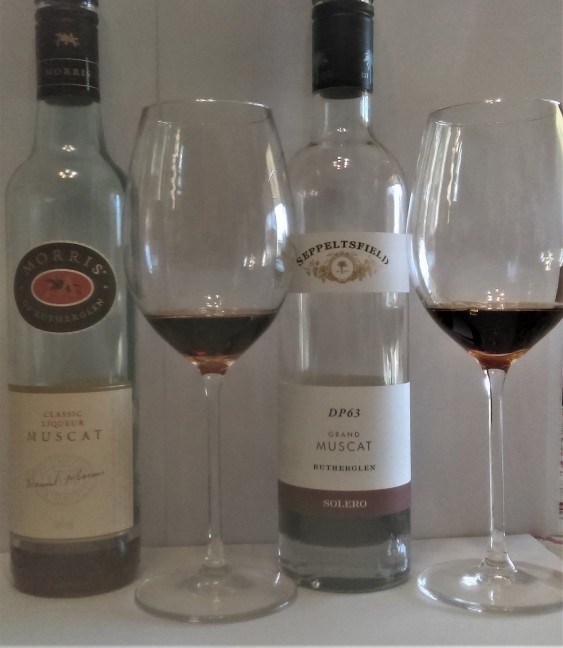 NV Morris Classic Liqueur Muscat 17.5%
Freely available for $25 – or under.  Bright mahogany in colour, it flaunts its raisin, roses, fruitcake and sweet spices; it’s lush, with some mocha joining the dried fruit flavours; it has a lingering finish that is bright, sweet yet not cloying, insistent on further sampling. Artfully made, with greater complexity than its price would indicate.

These are both exciting drinks that provide fabulous enjoyment with superb value. A worthwhile exercise is to try blending (bottled) muscats together in varying proportions. One useful tip is that a smidgen of little older material makes much more difference than expected.