2006 MF Richter Brauneberger Juffer Riesling Kabinett AP #35 9.5%
Mosel, and this bottle was found in a mini-stocktake. Few Kabinetts should be kept this long, so I was nervous. Cork was fine, and the colour was developed but not alarming.

Deep gold, but bright. Apple pie, sultana and raisin, citrus peel, sweet spices and mango. It’s full-on for a Kabinett, with 83 g/l residual sugar. On the palate, the mixed sweet spices are prominent, with redcurrant fruits, honeyed peach, mineral and citrus. The wine is surprisingly fresh, with excellent depth of flavour. Fully mature, it’s honest and a welcome surprise. My previous impression was posted on 15 July 2020 – and a relatively consistent note.

Drink up (it may have been better in the past) and 90 points.

1990 Stanton and Killeen Jack’s block (vintage) Port 18.5%
Rutherglen, Victoria 100% Shiraz. A recent – bargain – $33 auction purchase; rated 9.5/10 by the producer, it has assorted trophies and gold medals while the back label modestly proclaims, “optimum drinking around the year 2010”. A note on its sibling – the 1990  Moodemere –  was posted on 19 November 2018 with a similar note; this wine is slightly better!

Cork broke. The colour is developed ruby with bricking on the meniscus, mocha, camphor, floral, blackberry and sweet well-integrated spirit. Dark and dense, blackberry and red liquorice, mixed nuts, lavender, fine chalky tannins and light coffee. Lots of different aromas and intermittent flavours = complexity, and explain the score, I have many bottles from this producer, but can’t resist purchase when reasonable opportunities arise. Mature, but still vibrant and utterly delicious. 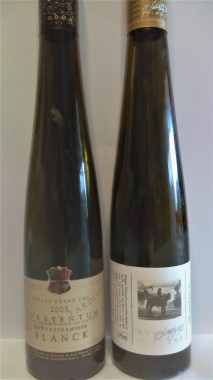 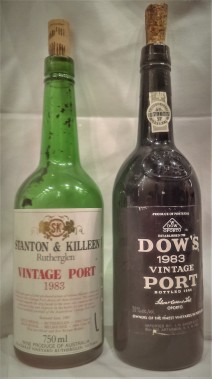 All served blind – it may seem premature to serve young Barsacs, but these proved wholly delicious, with enormous capacity to live and improve for many years. Cellaring estimates are conservative, but no-one is immortal.

2005 Paul Blanck Furstentum vendanges tardives Gewurtztraminer 12.5%
Alsace, screwcap! Half-bottle, purchased at the winery, from a special site. Light gold in colour, it displays musk, roses and oiliness. The palate is moderately sweet, but its persistent, varietal with a winningly appealing citrus twang

2007 Heggies “242” botrytis riesling 8.1%
A half-bottle located after my records showed I had none left (previously reviewed on this site). Amber/light copper coloured. The 242 refers to the amount of retained sugar, which comfortably sits at the BA level, and from a site in the Eden Valley, South Australia – where mostly dry Rieslings are produced, but often a small amount of botrytised Riesling. It’s packed with orange essence and marmalade, very decadent; on the viscous palate there are apricot and stonefruits. It’s still fresh, ultra-sweet -but still balanced-  some hardness is emerging, so drink sooner, not later.

1983 Stanton and Killeen Vintage Port 19%
Rutherglen, and a hot dry year. A solid bricky colour, but browning only on the rim. Ripe and sweet with some raisined fruit, iron and liquorice, sweet, chalky, lively but a little warm. But it’s 35 years old, and 100% shiraz. On the evidence of this bottle, no further improvement is likely, but it’s still a satisfying and rewarding wine

1983 Dow’s Vintage Port 20%
Portugal of course. Paler colour than the wine above, showing a more interesting fruit expression of blue and red fruits, and milk chocolate covered almonds. The palate is fine and detailed – and medium-bodied, but also suggests the acidity will hold while the fruit recedes. At this stage, the tannin is balanced, but every bottle will be different.

At 21 years of age, this Rutherglen (Victoria) fortified is still very youthful. It has 1 gold and 5 silver medals to its credit and composition is 26% Shiraz, 26% Touriga, 20% Durif, 13% tinta cao, 13% tinta barocca, and 2% Cabernet Sauvignon; a mix of “traditional Australian”, and Portuguese varieties. Remarkably, the wine is still available ($114) – with many other vintages- on the Stanton and Killeen website.

The cork emerged well, and in excellent condition. The colour is outstanding for its age, a very dense dark black crimson,  and there is an exciting range of aromas- dark liqueur cherry, almond-meal, blueberry, mulberry, and spice notes The quality of (brandy) spirit is excellent, and has integrated well. The palate is sweeter than Portuguese versions, but certainly drier than most Australian attempts. The palate is full-bodied but very supple, showing a lingering mix of black and red fruits, red liquorice and fine chalky tannins.  Above all, it is deliciously drinkable.

1986 Stanton and Killeen Vintage Port
Served blind, this wine was bricky in colour, showing sweet mocha notes, dried fruits and citrus peel. The spirit was sweet; the palate was also sweet, soft and mellow, and seemed Australian in style. The milk chocolate and plum flavours suggested Victorian origins, and my conclusion “around 30 years old, Victorian, Shiraz” turned out to be reasonably accurate. (95% Shiraz, 5% durif). The wine is fully mature, and bottle quality may differ!

2007 JJ Prum Wehlener Sonnenuhr Auslese Riesling AP#22 7.5%
Very pale in colour, this Mosel wine is supremely elegant and needs much more time (still) to reveal more of its charms. It displays smoke, petroleum, crunchy ripe red apple and tropical fruits, particularly just-ripe pineapple. The palate is pebbly, sustained and the acidity really masks the considerable sweetness. This is a mouth-filling, creamy, intense and decadent wine, but it’s not yet resolved, and I recommend a further 5 years aging if you are fortunate to own any.

The vintage was rated (by this Rutherglen winery) as 10/10, with a suggested drinking window between 2022 and 2026.  Their first vintage fortified to include a healthy proportion of traditional Portuguese port varietes (60% Shiraz, 25% Touriga, 5% each of tinta cao, tinta barocca and Durif), it was awarded 3 trophies and 13 gold medals at Australian wine shows. “Considered as one of the finest ever produced at Stanton and Killeen. Careful cellaring will reward the patient passionate port lover”. 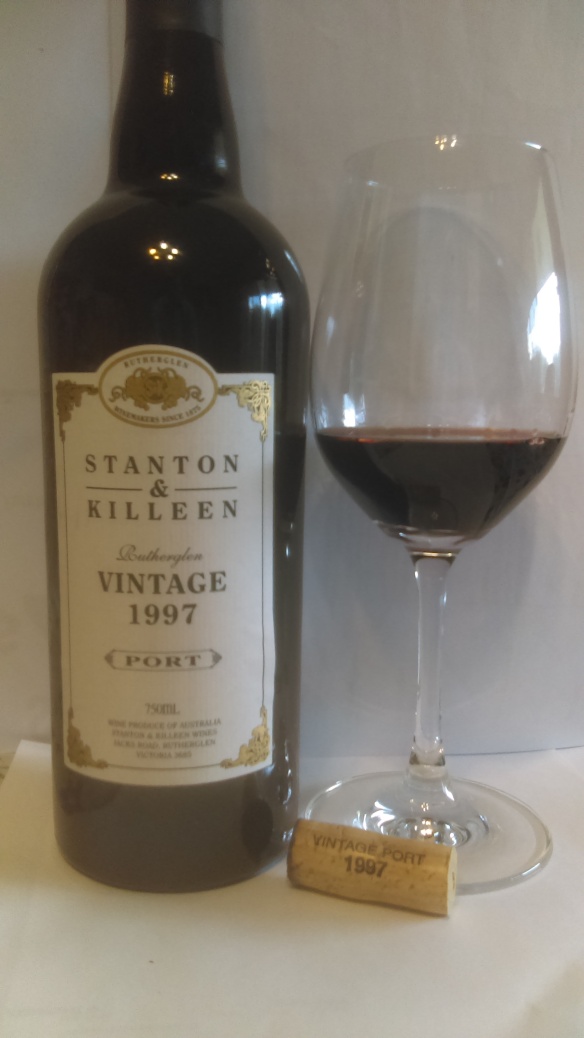 The cork is short, but in excellent condition. The wine has a deep ruby colour with some bricking; decanting removed a modest crust. Initial aromas included rose-petal, blueberry and raspberry  The palate is bright and fresh, showing sweet (but not overly sweet) red cherry, rhubarb and blueberry fruit, light milk chocolate, choc/mint and an occasional tease of plum, with still appropriately assertive tannins. Spirit is well absorbed.

The complexity and sustain makes this an outstanding wine, with a long future.

Here are some very brief notes of wines recently consumed where I had little opportunity for leisurely contemplation, and sometimes dim lighting!

Stanton and Killeen are based in Rutherglen (Victoria), and continue to make a Vintage Fortified  (their first vintage was 1971), including some traditional Portuguese grape varieties since the mid 1990’s.  They have conducted several retrospective tastings, and from notes they have published, the cepages, vintage ratings and their – conservative- optimum drinking spans have been included below. They have a number of older vintages still available for sale (here).

Served blind, I estimated this wine to be around 25 years old. Deep red colour with some bricking; camphor, lavender, musk, salted almond; dark fruits, mocha, spirit, cocoa. Plenty of time ahead – drink to 2030 and 92 points.

The vintage was rated as 8.5/10, with a suggested drinking window between 2020 and 2024, and was awarded 5 gold medals and 4 silver medals at various Australian wine shows – “decadence, cocoa, relatively dry, wholesome”. Drink to 2030 and 93 points.

The vintage was rated as 9/10, with a suggested drinking window between 2022 and 2026, and was awarded 1 trophy and 10 gold medals at Australian wine shows. Cocoa, raspberry and blackberry jam. This wine was amazingly vibrant, chewy with beautifully integrated spirit and fine tannins –  a long decant and further cellaring is highly recommended. Drink to 2040, and 95 points.

2015 Pressing Matters r9 Riesling
Tasmanian (Coal river valley) with around 9 g/l residual sugar; (the company also typically releases an r0, R39, r69 and r139 Rieslings), abundant vitality, clean citrus notes and the level of sweetness sits well with its framework of acidity; while it will keep, I would drink this wine while it is in a vibrant phase; anytime to 2025, and 89 points.

2005 Fritz Haag Brauneberger Juffer Sonnenuhr Riesling Spatlese 7%
Excellent winemaker, excellent site, and an excellent vintage in the Mosel, so I had high expectations. The wine is pale and youthful, with exciting viscosity, a touch of petroleum overlaying ripe red apple, flintiness and delicacy. Irresistible, so 93 points and drink anytime to 2030.

An excellent year for this style in Rutherglen- Stanton & Killeen and Pfeiffer made outstanding wines.

But this is the VP from Morris (correct but clumsily Morris’s on the label). The cork on this 20 year-old has performed its task – the wine (87% Shiraz, 13% Cab Sav) is a vibrant but slightly murky crimson (very little sediment when decanted); camphor, cherries, cocoa and mixed spices; the palate shows more dark fruits, especially plum; powdery tannins; a sneaky, approachable wine that looked better each time around, and positively youthful. The spirit has integrated beautifully. Warm, cuddly and no rush to drink this wine.

This wine that looked absolutely better with each assessment; complexity building – and longevity – becoming more apparent.

The two sweet white wines were served masked,  both from 2005, and were Chateau Filhot, and Chateau Coutet. Both are Semillon dominant (Filhot 60%, Coutet 75%, each with a smidgeon of Muscadelle, and the rest Sauvignon Blanc.  The Filhot was authentic to style, with barley-sugar, lime-juice, some candle-wax, and light phenolic characters. The Coutet was darker in colour, but brighter.  Orange-blossom was its main character with some supporting pineapple. The Coutet was certainly more powerful, richer and sweeter. Its texture was a delight – supple and mouthfilling. Its weakness was that there was some bitterness, and some coarseness. My impression was there was some errant rot as well as botrytis. 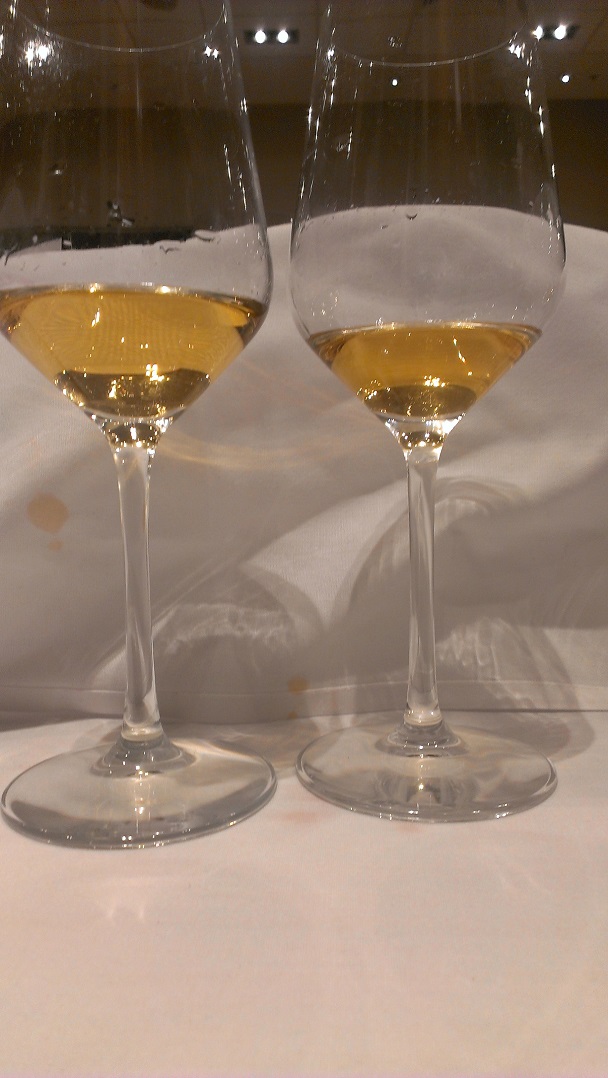 The Filhot was more straightforward, but highly enjoyable, and it represents fantastic value. I have previously pleasantly surprised by the 2001 Ch Filhot, and the common factor is that these were both excellent years for sweet wines from Bordeaux. I will watch for 2009 and 2010.

Dark ruby colour, my key observation of the wine was its slinky, and gentle. It’s a drier style but clearly Australian. Its packed with fine chalky tannins and flavours running from cocoa, fruitcake and dried fruits, dark berries and light mocha flavours. The spirit is appropriate and balanced. This wine is an outstanding example of an aged vintage fortified, with plenty in reserve for the future.

Its from Rutherglen, 90% Shiraz with some minor contributions from Durif and Touriga, a terrific wine made by the late Chris Killeen.